Minced meat cooks much faster than regular meat chunks and mum always cooked mince for us when she was in a hurry. Mince is comfort food for me in a strange way. The younger of my 2 brothers LOVES mince and will eat it in any form at any time of the day or night.


When growing up, minced meat usually meant beef. These were the days when Hindu political parties in India were more concerned with social development and had not yet started dictating what food products could and could not be eaten in the country. Beef was much cheaper than mutton and the cheapest option during the monsoons when fishing was just not done (ecological and climate cycles and all).

Now in most states in India, the sale of beef has been banned and buffalo meat is just too tough to bother cooking with,  so its just easier to cook with mutton. So this recipe was originally designed for beef mince, but can be cooked with mutton mince. Beef has a stronger flavour and you may want to use a bit more spices and tomatoes when cooking. 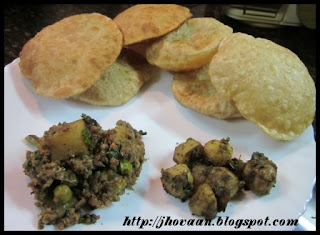 (in this picture it has been served with puris)

Method:
In a pan, heat the oil and add the onions, ginger and garlic (or paste).
Saute till onions turn translucent and then add the tomatoes and cook till it all turns mushy.
Add the potatoes and let them brown slightly, then add the mince, salt and stew powder.
Cook till almost done.
Then add the peas and gently let them steam till cooked.
Garnish with chopped corriander leaves (you can also garnish with a chopped boiled egg to make it look fancier when you have guests over)
Serve hot with puris or rice and dhal

Its so easy to use leftover mince. There are so many things you can do with it.
Stuff it into samosas
Bake mince puffs
As a topping for home made pizzas
Sloppy joes
Sandwich fillings.
You can smash the potatoes fine and add a little more boiled potatoes if needed and turn them into cutlets.

Note: My friend May who is also Manglorean has a similar recipe for Minced Meat with Vegetables Its almost identical to my mums recipe. So you can compare the two and see how Manglorean cooks have subtle differences while cooking theoretically the same dish.

Hi Kimi,
Nice to see you on a blogging spree...:D
I know I have stopped blogging on the Chef. It is hard to maintain 2 blogs and all my time is spent on the Lohr blog. Now that Spring is here, I should be back to blogging on The Chef too.

I know what you mean May, I hated cooking during winter. Putting my hands even in the heated water meant they would get frozen after I dried them, so constant handwashing to take pictures was completely out of the question :)

Hope to see you blogging again on the chef soon

Lovely ...i like keema matar and this one can become a favorite too i guess. Have to check your mangalorian masala first.

The recipe for the masala is just before this post and I've included a simple version too, so you don't have to make a large quantity either.