Chicken Piralen is technically a semi dry dish, I left a little more gravy in it than normal because I wasn't in the mood to make a dhal or another curry for dinner.

. While her book is wonderful and has some lovely looking dishes, I wouldn't recommend it to a newbie cook or someone completely unfamiliar with Malyali (Kerala) cuisine. The instructions aren't precise, so unless you know where you are headed and have a fair idea of what you want you dish to taste like, you may find the book quite confusing.

Based on feedback from my other foodie friends, I think most of her dishes would taste best if cooked in a mud pot. But today I was in too much of a hurry.

When I made the dish, I mainly used her ingredients and roughly followed her recipe with some modifications. It was quite easy to throw together as I just had to chop up some onions and hand pound some spices, everything else I used powders and pastes. 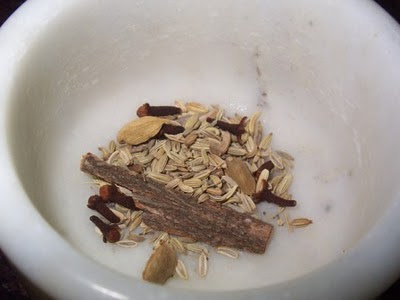 Method:
Mix all the ingredients except chicken and water to form a marinade.
Add the chicken (I didn't marinate this time, but I'd like to marinate for at least 1 hour next time, especially since the legs were rather large and fleshy). 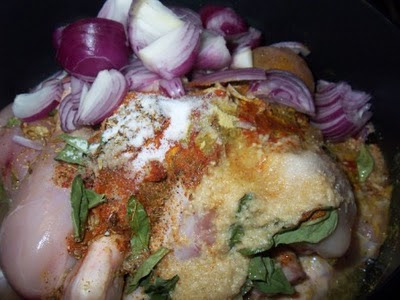 Add enough water to make a gravy or semi gravy.
Cook on a low fire till done. 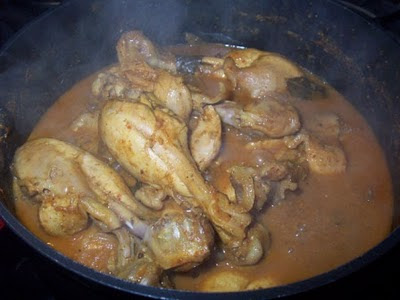 I served it as a curry. Mrs Mathew recommends taking the cooked chicken out of the gravy and shallow frying the chicken, drying out the gravy and then mixing the 2 again ad frying for awhile longer.

You may also like to take a look at Ria's version which looks much more like Mrs Mathew's Chicken Piralen while also omitting the frying step.