I'm loving cooking with Vikas Khanna's Savour Mumbai cookbook, it has so many different dishes from different parts of the country. The Kaju Kothimbir Wadi - Steamed Cashew and Coriander Squares - from Diva Maharashtracha, were itching to be cooked and were a huge hit once ready.

If you do try this, don't be disheartened with the taste of the steamed Wadi's, the sauteeing post that, really improves the texture and flavour. 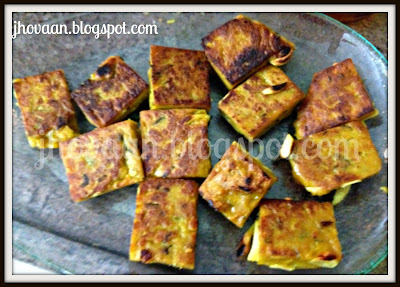 Method:
Mix all the ingredients except the oil. Then add 1.5 cups water and mix well to make a thick batter.
Heat 4 tbsp oil in a frying pan over low heat, add the batter and cook stirring continuously for 15-18 minutes, till the mixture becomes a thick doughy batter, then remove from heat. 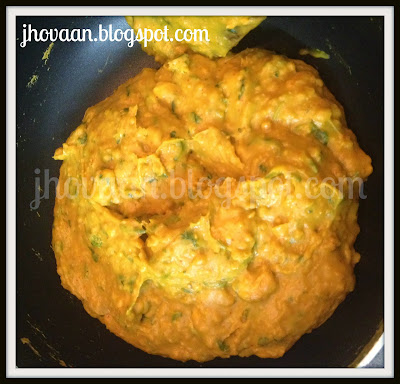 Grease a small tray and spread the mixture evenly about 1 inch thick.
Set aside to cool and set.
Cut into squares. 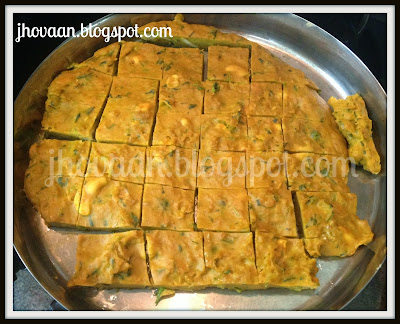 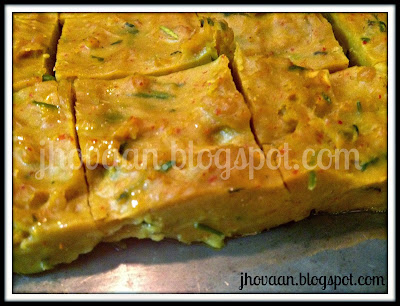 When completely cool, saute the squares in a little oil (you can shallow fry them too if you prefer) till crisp.
Serve hot with ketchup or green chutney.

Posted by Kim at 4:54 AM 0 comments Links to this post

This snack went down well at Pre-Xmas dinner. Its a great bar snack too and jazzes up the plain nuts normally served with drinks. 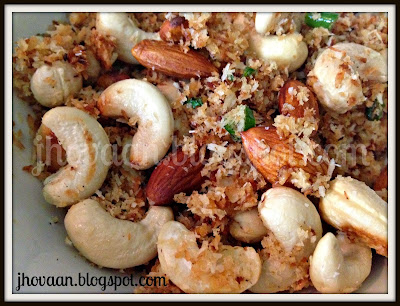 Method:
Heat the oil in a wok or large pan.
Stir in the honey (it may seem counter intuitive to add liquid to hot oil, but trust me, the honey doesn't splatter)
Mix well and in a few seconds, add the nuts and dessicated coconut and stir fry until golden brown.
Add the chillies, salt and fresh pepper to taste.
Mix well.
Serve warm or cooled.
Serve in newspaper cones, to feel like a street snack. 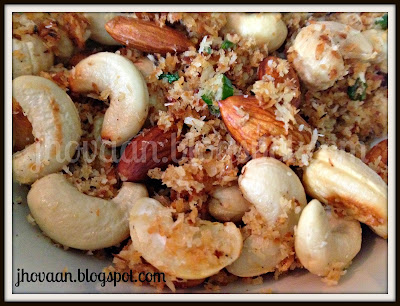 Variations :
If you want a cheaper snack, use roasted groundnuts.

Posted by Kim at 4:35 AM 0 comments Links to this post

For Christmas this year, I wanted to make a special roast. I'd seen a picture of a Bacon Wrapped Roast Chicken somewhere on the web and thought it was a great idea, especially since everything tastes "Better with Bacon". The picture I saw, didn't have a recipe, so I just decided to upgrade my Roast Chicken with Duxelles 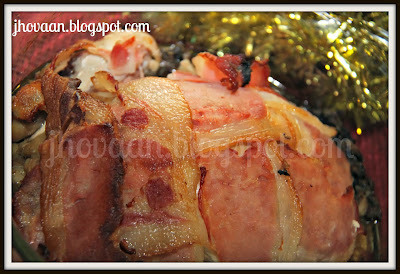 Ingredients:
1 roasting chicken with skin - around 1kg
1 quantity duxelles (from 400gm mushrooms) at room temperature
1 tsp salt
juice of 1 lime
200 gm packet of bacon (with some fat at least)

Method:
Clean the chicken well, especially the inside and dry
Rub the chicken with a mixture of lemon juice and salt, both inside and outside and keep for 10-15 minutes.
Stuff the chicken with the duxelles and if you can get the skin loose, pack some duxelles between the skin and the flesh.
(My butcher here in Ahmedabad, ends up tearing the skin when he de-feathers the chicken and unless I clean my chicken myself, I have to make do with what I'm given)

Note: When making the duxelles for this dish, I added some finely chopped bacon to the mix too. 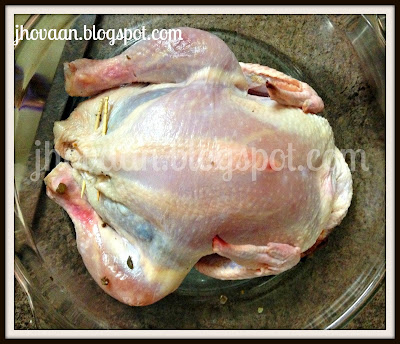 Wrap the chicken with bacon slices, in any pattern you choose. I tried the checkerboard pattern to try and match the picture that I had seen, but since the bacon I bought wasn't in straight lines, it doesn't look as neat as the original picture I had seen. 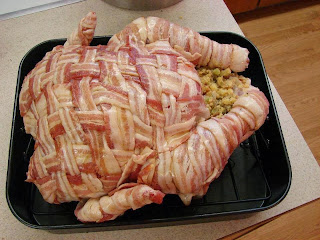 I also used 2 extra legs in the dish, so there would be enough thighs and drumsticks to go around the table. 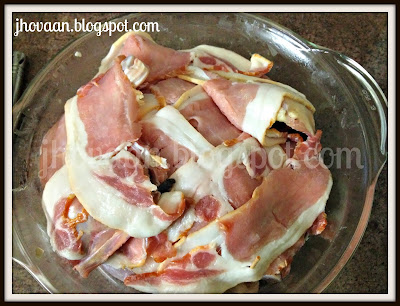 The chicken does not need basting, because the fat from the bacon will keep it nice and moist.

Roast in a preheated oven at 200C for about an hour and a half.
Keep an eye on the chicken as it roasts and increase or decrease the time as needed. 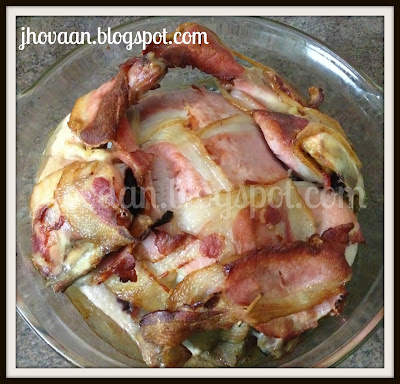 Serve hot with a herby Italian bread or a simple pasta.

Method:
Flatten & then marinate the chicken for 15 minutes in salt and pepper.
Fold the herbs into the cream cheese.
Layer an oven proof bowl with the chicken, the cream cheese and the bacon on top.
Bake in a preheated oven at 200C for about 45 minutes.. 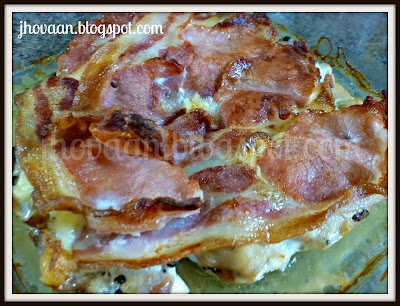 Posted by Kim at 5:07 AM 0 comments Links to this post 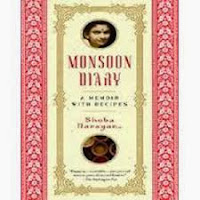 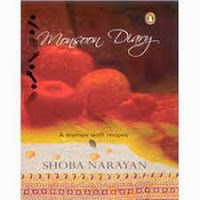 "Monsoon Diary - A Memoir with Recipes " by Shoba Narayan is a lovely reminiscence of growing up in Tamil Nadu a couple of decades ago. Shoba then takes her readers along with her on trips to her grandparents house and later on to the US where she goes to pursue further studies.

Each chapter deals with a phase in her life, from the first food she ever consumed to having relatives visit her house in the Us, once she is married. At the end of each chapter is a recipe which ties into the chapter.

The recipes are clearly meant for her primary audience - people living in the US - so ingredient availability, substitutes and even ingredient names are Americanised. But don't let that put you off. It actually just helps people unfamiliar with Indian ingredients to locate them easily and cook with confidence.

I did empathise with most of Shoba's experiences, being female from a small town and heading off to the US on my own, but the one thing I couldn't reconcile with, is that if she was so good at cooking, what stopped her from cooking familiar meals once she reached Hollyoke. I used to cook spicy Indian food practically everyday, inspite of working full time and overtime on most days. she claims she didn't realise that she missed familiar food, but somehow I just can't echo that sentiment. This was the only part of the tale that didn't sit right for me.

My favourite story in the Monsoon Diary is of the Malayalee Cab Driver in New York. It was such a touching gesture and reminded me of the genorosity that humans are capable of, if they allow themselves.

I started reading the Monsoon Diary a month ago, because I knew that I wouldn't have time to read at a stretch. It was perfect for the purpose. You can break after every chapter without worrying about wanting to drop everything else and get back to reading.

The book is poignant, a lovely reminiscence and a pleasure to peruse.

I hope to try the idli recipe sometime soon.

Posted by Kim at 5:17 AM 0 comments Links to this post