Many Indian recipes call for gram flour or besan. It is the main ingredient for batter frying pakodas, making dishes like kadhi and desserts like besan ki laddu and mysorepak among others.

It is high in proteins and low on gluten and sometimes used as an egg substitute by vegans.

American stores may sell this as Garbanzo flour or Chickpea flour.

I did not find this ingredient in Egyptian markets, even though garbanzo beans - hummus are very widely consumed. But I did find the chickpea lentils in Egypt. 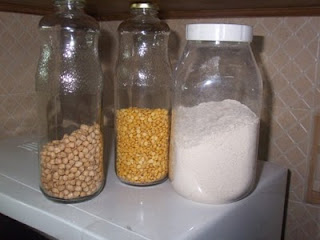 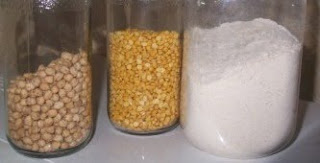 The first bottle to the left, contains chickpeas /  garbanzo beans / channa / hummus.
The middle bottle has the chickpea lentils / channa dhal which is available commercially. Essentially this is chickpeas that are cooked, cooled, roasted and dried.
The final bottle contains besan which is normally a pale yellow shade.

Besan can be made by powdering roasted chickpea lentils, in case you cannot find it easily in a market in your city.

Its also available on Amazon.

i love to use my grains and beans in clear jars as a decor n kitchen. makin list to stock for some of your recipes, there r so many, this will be an adventure to the pallette, yum.

With grains and lentils if you don't plan to use regularly, do buy them in smaller quantities - they don't go bad as quickly as nuts, but they don't last as long as spices either.