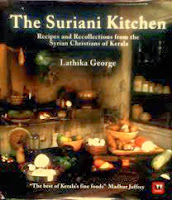 This Recipe Book by Lathika George is being sold by Westland in India as The Suriani Kitchen - Recipes & Recollections from the Syrian Christians of Kerala. I think it is the same book that is available on Amazon as The Kerala Kitchen: Recipes and Recollections from the Syrian Christians of South India (Hippocrene Cookbook Library)

The Syrian Christians are historically a Malyali Brahmin Community that intermarried with the Syrians who came to trade in Kerala or locals who converted to Christianity when St Thomas came to India in 52AD. The food of this community therefore has traces of all these varied influences.

Kerala cooking stands out among Indian cuisines for its spectacular use of local spices. Having bought spices all over India, I have to agree that the best quality of garam masala spices come from Kerala. No wonder then that the cuisine exploits the availability of the "exotic" spices.

A unique feature of this cookbook is that it blends stories, details of rituals/celebrations and memoirs along with recipes, giving the reader a flavour of the community along with its cooking.

This book has fairly extensive details on the different vessels and spices used in Kerala cooking.

I intitially picked up the book with the memory of some excellent food consumed at a Syrian Catholic friends wedding in interior Kerala, a decade ago. He doesn't cook and his wife cooks from her own repertoire. This particular branch of cuisine isn't on the menu in most "Kerala" Restaurants, so I had almost given up on being able to taste those dishes again. Fortunately, with this book, I can attempt to recreate some of them in my own kitchen.

I have tried some of the recipes and found them quite authentic. Will blog about some of them shortly. But now I'm postponing cooking from this particular book for awhile. This style of cooking is not really suited to Delhi's horridly hot summers.

So until then, I will enjoy the pictures, illustrations and stories in this book and visualise how the recipes will taste, but cooking from this collection is hereby temporarily postponed. :)