Kuswar is the term given to all the special preparations that are made around Christmas time in Mangalore. The preparations are either sweet or savoury. They are made in the run up to Christmas.

Fruit for the fruit cake is soaked well in advance (sometimes upto 2 months), but the rest of the preparations start around the 1st of December, depending on how many varieties and how much quantity is to be prepared.

This kuswar can be kept in air tight boxes at room temperature for 3-4 weeks and is served to everyone who visits the home. On Christmas day an assortment of kuswar is sent to friends and neighbours. In my grandma's time, all the kuswar used to be homemade and there were long discussions with each plate of kuswar that came home as to who made the best kokkisan, whose cakes were the lightest and moistest, which aunt had splurged on nuts and made marzipans and who was stingy with the filling in the neuris.

At mum's house, we kids learnt quickly which our favourites were and would call dibs on Aunty V's kokkisan and Aunty J's marshmallows as early as November. Even in the last few years, when I've lived continents away from mum, I call telephone dibs on some of these goodies  - since I always make it home for Christmas (except for 2 years).

My mum and her sisters too had their own specialities. And even though they were all settled in different cities, they all came home to Mangalore for Christmas to spend it at our grandparents place. Bringing kuswar goodies from their own kitchens.

I remember running to grandma's home as soon as school was over to help make the kuswar. An assembly line was set up around the dining table, under the efficient eyes of grandma. Mum, my aunts who had come in early, uncles who were cajoled into sitting down with us and the kids who were old enough to lend a hand, would all be seated round this table talking, laughing, joking and singing carols. It was so much fun and just thinking of those days warms my heart.

The frying was tough business because of the quantities involved and the Manglorean humid climate, so the frying station would be taken in turns. The younger kids kuswar shapes and sizes would be all over the place, but grandma would fry those misshapen pieces too and serve them for tea the same day. It was so much excitement for the little ones.

Mum does most of the baking. Since the majority of her kids hate raisins in our sweets, she normally makes a date and walnut cake rather than a fruit cake. Macaroons, date rolls, nankhats and other cookies.

Aunty M makes chocolates of different flavours and wraps them individually. Her secretary Sunita is East Indian and Sunita's mother an expert at East Indian cooking, sends us Marzipans, marshmallows, milk toffee, jujubes and other such goodies.

Aunty Z makes a mix of traditional kuswar and baked goodies. Her husband Uncle A makes some awesome homemade wines from a myriad of sources - rice, raisin, grapes, ginger or pineapple. He also makes a mean Irish cream.

I do have a lot of uncles who are completely at home in the kitchen. Uncle O's Christmas cake is famous. More fruit than flour. The pudding is so rich, you can just have a sliver of it, with a healthy side of vanilla ice cream to balance the richness. His pudding lasts for years in the fridge with no side effects.

Me, it depends on my mood. I know what mum is gonna make and try and make something different. But what I make is dependent on where I am, the availability of ingredients and the climatic conditions. Most often it is something completely non-traditional (because I know I can never cook kuswar as well as nana or mum and her sisters and I will get those goodies at home). One year it was gingerbread cookies, another I ended up with shaded marzipans (I couldn't get the colouring right), yule logs, jam rolls, thumbprint cookies, coconut cakes and so on.

When you try to keep refined flour, sugar and deep fried stuff at a minimum in your diet, its difficult to let go just because it is Christmas.

Traditional Manglorean kuswar uses rice, coconuts - grated and coconut milk, jaggery (now substituted with sugar), cashewnuts, eggs and cardamom for flavouring. And if frying was involved it was Dalda or Postman oil (not coconut oil except for banana chips). All these ingredients are grown locally and in the early days these came from ones own land. Soon cocoa and maida made an appearance in the ingredients list. With a populace that traveled the world and returned to Mangalore for Christmas, the influences soon trickled in from Anglo Indian, Goan and East Indian styles coupled with recipes from Australian and American issues of Womens Weekly and Good Housekeeping. All these recipes have been included in the Manglorean kuswar repertoire.

While the recipes I will cook myself in the run up to Christmas will not be the traditional ones, I will add my mums recipes with pictures once I go home. So you can expect the kuswar series to go on well into January when I'm back from my Christmas Vacation. 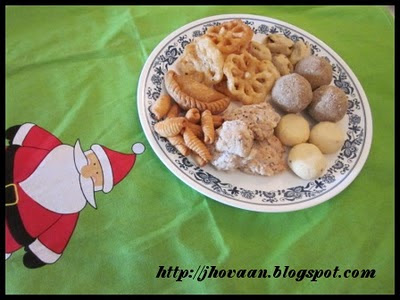 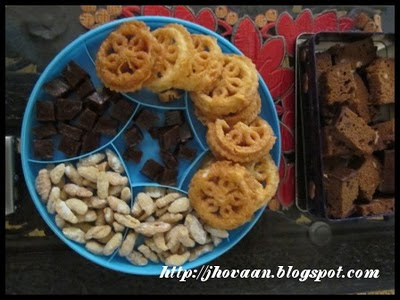 Suprisingly, I can't find a kuswar picture in my albums until 2007, will search further or take a better picture when I'm home later this week. Until then, "May the Peace and Blessings of the Christmas Season be with you and your family" 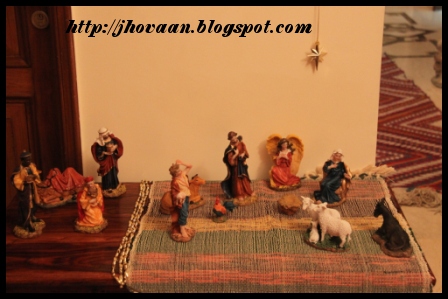 Today was Terra Madre  day and I had hoped to cook something local, instead we were invited out for dinner with friends who were in the country for just awhile, so we ate at a local restaurant :)

Since I hadn't cooked, I asked my sis to send me a pic of something mum had cooked. Mum almost always cooks with locally available ingredients. Some of these ingredients and vegetables aren't even available outside of Mangalore. 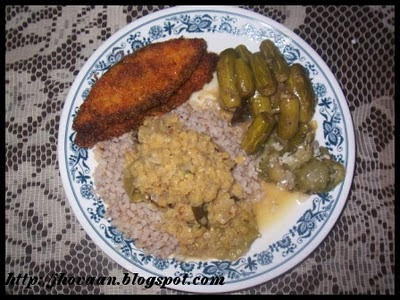 In this picture is red rice (unpolished rice that is commonly eaten along the Kerala to Goa coast. Locally grown and sold. It takes much longer to cook than white rice and is not as soft to eat. It has a nutty flavour and is extremely high in nutrition. Nees - the water that it is boiled in, is extremely high in nutrients and is served to patients who do not have the strength to eat solids.

As kids with colds or fever that made us lose all taste for food, the remedy was a hot glass of nees with a piece of hot and spicy lime or mango pickle mixed into it for flavouring.

The dhal is a dish we call bimbli saar. Saar is very watery compared to a dhal, just slightly thicker than a rasam and it gets its sour taste from sliced bimblis - a local Manglorean sour fruit. Arhar/tuvar dhal is boiled with bimblis, chopped onions and green chillies in a pressure cooker. Seasoning is with sliced onion or crushed garlic or dry red chillies. - These spicy Red chillies are grown and dried in Kundapur - a town a few kilometers away from Mangalore.

The red dish is Rawa Fried Pomfret. The fish is caught off the coast of Mangalore. These are slices of pomfret marinated in Meet Mirsang which mum grinds herself at home and rolled in a light layer of rawa before frying with a tsp or 2 of oil.

The 2 vegetables are also local to Mangalore although in recent times, Tendli is now available outside the Konkan coast region. Gosale or Ridge Gourd also appears on our dining table quite often. 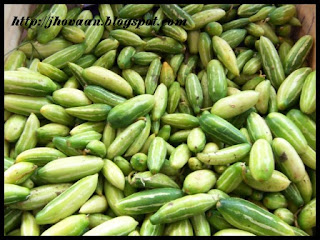 Tendli Mirya Peeto is made by cooking Tendlis with onions, sol (another local souring fruit that is used in dried form) and salt and pepper powder until done. Then a little coconut milk is added to the dish to tone down the pepper.
(To prep the tendlis, chop off the ends and make a single cut lengthwise upto half the depth of the tendli to allow the flavours to permeate better. 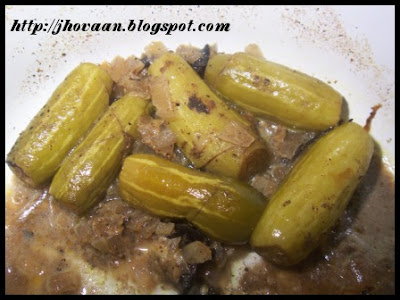 Gosale Naarl ani Tel Piyao is the traditional way of cooking most vegetables in our community. The preparation is also known as Fugath in Goan and Anglo Indian styles of cooking.

Scrape the edges of the ridge gourd to remove the thick and hard skin, but leave enough on. This vegetable is extremely high in fibre and it comes from its skin. Slice into thin circles.
Heat a tsp of coconut oil, add some sliced onions, lightly stir fry, then add the sliced ridge gourd.
Add salt and a souring agent like Sol or tamarind or bimblis to taste.
Cook till done.
Sprinkle fresh grated coconut on top and stir on the fire for a minute or 2 before taking it off the flame. 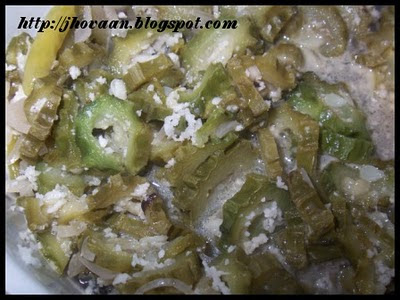 I have to mention that the coconuts used at home come from Grandma's garden and mum grates, grinds and extracts the coconut milk herself, no store bought Dabur Coconut milk has ever crossed her threshold.

What you see on that plate is a traditional vegetarian meal that is made at home when we want to eat light after nights of parties, when we have just arrived home and want to eat dishes we don't get outside or can't cook in our current cities or on Fridays in Lent. Wedding & Christening season has started in Mangalore and they are already eating light when eating at home.