Upkari is a common method of cooking vegetables and lentils by the Manglorean Konkani community. It is similar to the Fugath cooked in Goan & Anglo-Indian homes. 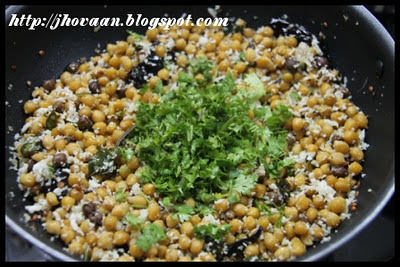 This particular dish is made from the small white channa (chickpeas) rather than the full size kabuli channa. It can also be made with small brown channa.The picture below is to give you an indication of the size. The bowl on the right has the dry channa and the bowl on the left shows the soaked and cooked channa. 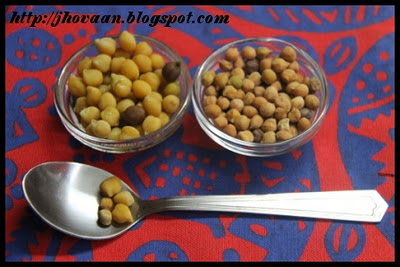 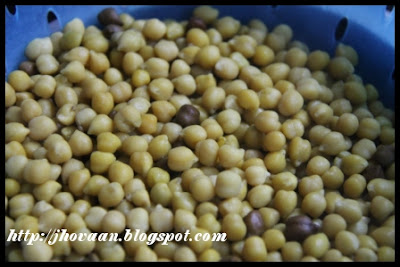 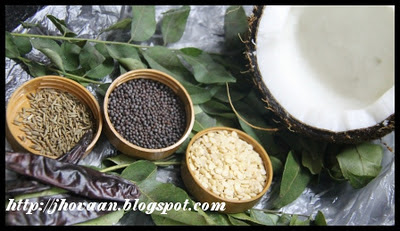 Method:
In a pan, heat the coconut oil, add the asafoetida, then the urad dhal, then the mustard seeds, the jeera, dry red chillies and the curry leaves for tempering. 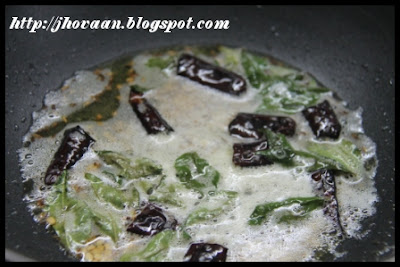 Next add the coconut and the fresh green chillies if using and fry a little until the coconut is cooked. 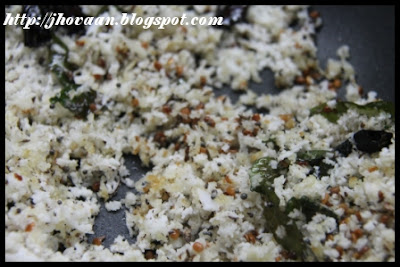 Add the cooked channa, use a little liquid from the pressure cooker, if you want more moisture.
Garnish with chopped corriander leaves. 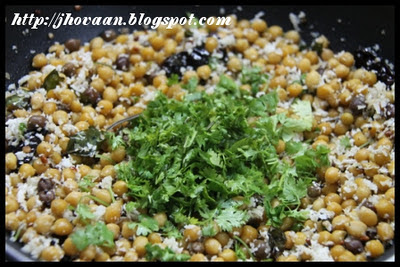 This dish is a little dry to eat with just rotis. But goes very well with rice and sambhar or rice and dhal.

Posted by Kim at 4:30 AM 2 comments Links to this post

This recipe is from Banu Hajratwala's - Gujarati Kitchen, a book I cannot recommend heavily enough. Instructions are clear, precise and detailed. In case you haven't read my review yet and are wondering how lamb chops could be a Gujarati dish - its because this is Gujarati Kshatriya cuisine. 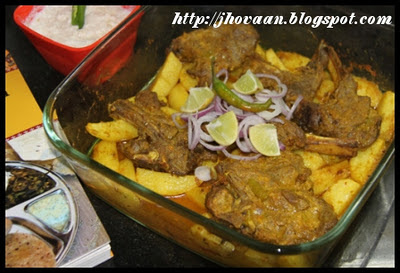 This recipe is reproduced here as part of my review of Banu Hajratwala's - Gujarati Kitchen for the Book Reviews Program at BlogAdda.com.

My details here are not half as detailed as the way Ms Hajratwala's instructions are. While I do occassionaly say that a book is worth picking up, this book is a must have for anyone interested in a wider spectrum of Gujarati food or wants a simple introduction to Indian food. Gujarati Kshatriya cuisine is just one of the many cuisines cooked/available in India. What makes this a great introduction to someone new to Indian food is the detailed descriptions, substitutions possible and the coverage of Indian staples like rotis, dhal, curries, pickles in this book.

I've used olive oil instead of regular oil and apple cider vinegar instead of  lemon juice. I also cooked just half a kilo of chops, since I was cooking for just the 2 of us. Since I was using a microwave oven to bake, I used plastic wrap instead of aluminium foil to trap the moisture inside. Other than this, I stayed true to the recipe even down to the 1/4 cup oil.

For my friends from Guwahati wondering how I could procure mutton chops  here? - I used Al Kabeer's frozen chops.

Prepping the Meat:
Clean, rinse and dry 1/2kg mutton chops, removing extra fat.
Marinate in a mixture of 1/4 cup apple cider vinegar and 1.5 tbsp salt for at least half an hour.
This reduces the smelll in the meat and also tenderises it. 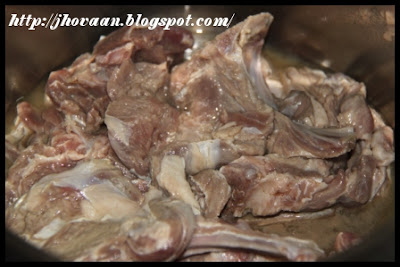 After half an hour, drain the juices (they would have turned a bit cloudy - thats just a reaction of acid with protein), rinse and dry the chops.

Method:
Make a marinade with all the ingredients except the potatoes. 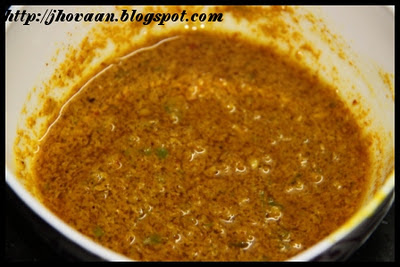 Apply 2/3rds of the marinade onto the prepped lamb chops and leave for at least 1-2 hours or overnight. Reserve the remaining marinade. 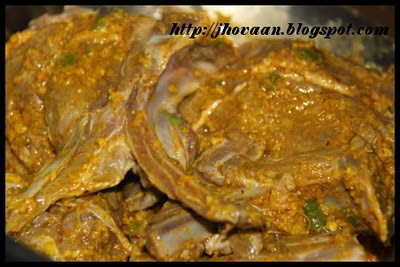 When ready to cook, prep the potatoes and mix them with the remaining 1/3 marinade and lay them flat in a single layer in a baking dish 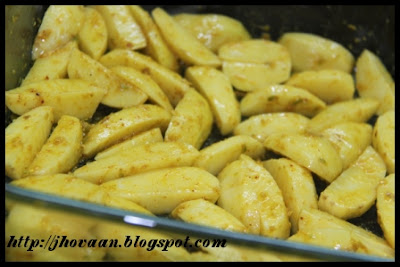 Then layer the mutton chops on top of the potatoes. 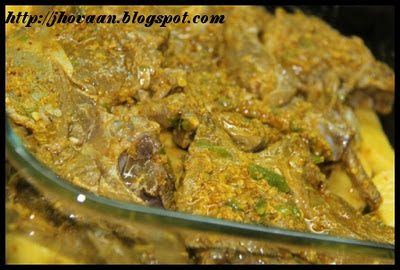 Preheat the oven to 190C.
Cover the pan with aluminium foil (in regular ovens) or 3 layers of plastic wrap for microwave ovens)
Roast for 20 minutes.
Remove from oven, turn chops over and baste with dripping. (don't turn the potatoes, only the chops)
Cover & roast for another 20 minutes. 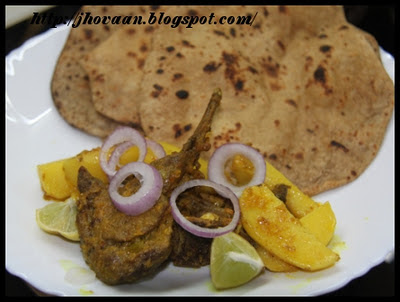 I served the chops with Rotis and Raita. It will go very well with garlic bread too. 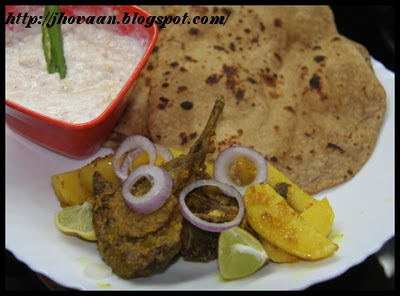 Posted by Kim at 2:14 PM 0 comments Links to this post 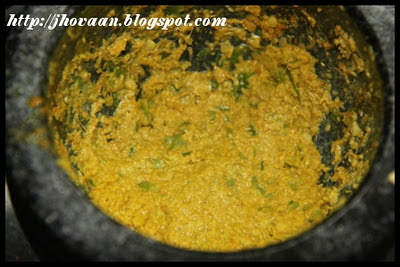 When reviewing Banu Hajratwala's - Gujarati Kitchen, I decided to cook Chaap Ne Bataka Roast - Roasted Lamb Chops with Potatoes. To make this, I needed 3 tbsp of Gujarati Fresh Masala. This recipe was also included in the book.

While the original recipe (page 45) makes 6 cups of masala that can be refrigerated for 6-8 weeks or frozen for longer, I wasn't sure whether I would be cooking that much Gujarati food to justify grinding such a large quantity.

However Ms Hajratwala had also conveniently included the quantities to make 3 tbsp of masala. Most of her recipes that require fresh masala, need 3 tbsp for a 2 person portion and 6 tbsp for 4 people.

Since I was making such a small quantity, I did not want to bring down my mixi (I have a really tiny kitchen here in Guwahati and there is no space to keep the rotimaker, mixi and other essentials on the kitchen work surface, so these are all stored in high up ladder accessed cupboards to be used only if absolutely essential) So I used my Thai mortar and pestle and it worked perfectly. The Thai Mortar and Pestle somehow manages to grind pastes much finer than any Indian mortar and pestle that I have used. 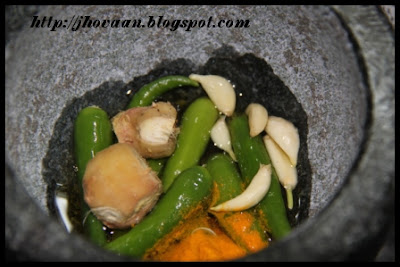 I substituted the oil in the fresh masala with olive oil and the lemon juice with  apple cider vinegar and it tasted wonderful, I see myself grinding this in larger quantities to use in other recipes too. It tastes lovely and is wonderful as a marinade for any kind of meat. I can use this as frequently as I use my Manglorean staple of meet mirsang.

While I've added the oil and lemon juice in the picture above, before pounding, I always recommend adding wet ingredients last, after the masala is pounded, when pounding by hand - otherwise you will have to deal with a lot of splashing. 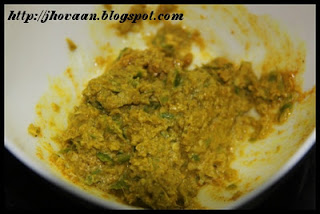 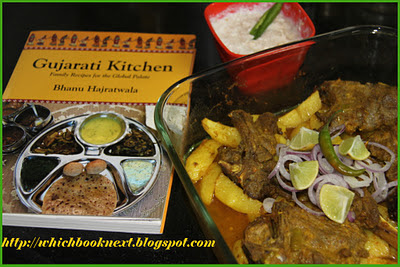 When I first received Bhanu Hajratwala's "Gujarati Kitchen", I was expecting a Vegetarian Recipe book. I  had, had a recent twitter exchange with a friend who wanted to know where she could find a Gujarati Restaurant in Mumbai, but it had to only serve Vegetarian food. I jokingly asked if there was any other kind. The only response that came up on twitter to this exchange was "perhaps Bohri Muslim Food" "Does Gujarati Parsi Cuisine count?"

So it was a wonderfully pleasant suprise to find that Bhanu Hajratwala's cookbook, covered Non Vegetarian food too. Reading the book, revealed that this was Gujarati Kshatriya cuisine. This is not to say that the book only covers non-vegetarian food. There are plenty of recipes for Gujarati staples like dhokla, rotli, daal dhokali, khandvi and theplas. The non-vegetarian dishes are made from goat, lamb, chicken and seafood.

Bhanu Hajratwala is a Gujarati who was born and brought up in the Fiji Islands (The first wave of Gujaratis migrated to the British Colony of Fiji Islands in the early 1900's) As often happens with early immigrants, the families held on to the sanctity of their original Gujarati recipes with minimal adaptation, other than forgetting recipes for which ingredients weren't available.

Ms. Hajratwala moved to the US when she got married and moved with her husband across New Zealand, Australia and the United States. Through all these moves, she enjoyed cooking for and feeding her family and friends while pursuing her own career as a physical therapist. Her friends soon started asking her to teach them how to cook Gujarati food and she readily agreed. This later expanded to conducting cooking classes and demonstrations and contributing recipes for community cook books.

The book begins with a list of ingredients commonly used in Gujarati cooking and other than ganthoda kokum, batrissu (a Gujarati spice mix), charoli and vaal they are easily available across India and in Indian stores abroad. A list of measurements follows which clearly gives liquid and weight substitutes for terms like 1 cup, 1tsp etc. Since the book uses US/Imperial measures throughout, Metric conversions are also provided in this section.


Gujarati cooking has a few spice blends specific to their cuisine like fresh masala & seafood masala and some commonly used ones like chai masala and garam masala. Understanding that many of the readers of this book may not be Gujarati or cook Gujarati food daily, Banu has also given exact directions to make smaller quantities (3 tbsp) of the fresh masalas that have shelf lives of 6-8 weeks in the fridge and this kind of thoughtfullness carries on through the book.

The recipes that follow are categorised in the standard format: starters, mains, breads, rice, kadhis & dals, sweets, chutneys & relishes, pickles, snacks for teatime, drinks and a special section for mukhwaas.

The recipes are very clear and easy to follow. Substitutes are detailed. For eg: in the preface, Banu explains that fresh or whole turmeric is much better and healthier than turmeric powder and then in all the recipes she gives quantities for both whole turmeric and powder for the convenience of those who have no access to, or the time to powder and grind whole turmeric. The recipe for Khandvi includes both the stove top cooking method and a microwave oven method.

Her husband, Bhupendra's support extends beyond the standard spousal variety. He has provided line drawings for this book.While in some cases they are purely decorative, in a lot of places they are illustrative. Like how to roll patra, fold a samosa and crimp a ghughara (gujiya).

Given that this was my first insight into non-vegetarian Gujarati cuisine, the first dish I decided to try from this book was the "Chaap ne Bataka Roast - Roasted Lamb Chops with Potatoes" Its difficult for me to follow recipes from a book to the letter, since I love to improvise, but since I was reviewing the book, I tried to stay true to the recipe. So I only substituted the oil with olive oil and lemon juice with apple cider vinegar, since I did not have enough limes/lemons on hand. The chops turned out very well, even though I served them with rotlis/phulkas rather than the recommended garlic bread and the recipe was very easy to follow.

Banu's instructions are precise and detailed, substitutes are very clear, notes on which food can be stored for how long and the ideal way to store them are also included. Her thoughtfullness towards the home cook  show through every recipe. Banu says she originally started measuring quantities and writing recipes to share them with her children who were leaving home for further education. This concern and detailed attention shows in every instruction.

The only thing you need to watch out for, when cooking from this book is that the cooking time specified, is purely cooking time. It does not include pre-prep time or marinating time. It assumes that you have the spice powders & blends ready and soaking and sprouting time isn't included either.


"Gujarati Kitchen - Family Recipes for the Global Palate" is thus an excellent pick for anyone who is a new cook or a comfortable cook, someone who wants to learn Gujarati cooking or even someone looking for a simple introduction to Indian cooking.