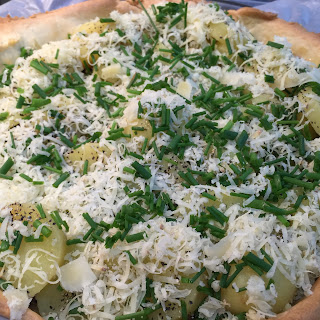 Tesco has a range called #TescoFinest in which they package some of the best food under their own brand name. I had a chance to #TryForLess, some of their cheese from the Tesco Finest Range and I decided to go for a Comte Cheese.

Comte is a French full fat hard cooked cheese made with unpasteurised cow's milk, traditionally made and matured in the Jura region. Since I had never tasted it before, I though this would be a wonderful opportunity. 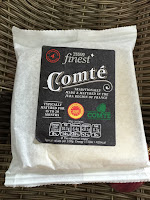 But once it arrived home, I was stumped - "What should I cook with it?" Fortunately Tesco on Twitter came to the rescue and directed me towards a Potato and comté savoury tart recipe.

The recipe looked interesting enough, but I wanted to add more flavour and a bit of meat to it, so I made a few changes. The original recipe is vegetarian. I added some pancetta for flavour and meatiness, but this recipe can be made without it.

There's a bit of an eggwash used to seal the pastry, but there isn't much liquid in this recipe, so you can skip the egg if you want to turn it completely vegetarian or vegan.

Method:
Line a 7 inch springform fluted tart tin with nonstick baking paper.
Roll the pastry out on a lightly floured surface to 5mm thickness and use it to line tart tin pressing in well all over.
Prick the base all over and chill.

Cook the potatoes in a large saucepan of boiling, salted water until tender, usually 15-20 minutes.
Drain and allow to cool.

Heat a pan and fry the Pancetta in it until it begins to crisp up.
Remove the pancetta and keep aside, but leave the oil in the pan.
Melt the butter and olive oil in the same pan over a moderate heat and add the garlic.
When they begin to crisp/brown a bit, add the onions, sweating with a little salt until soft; 6-7 minutes, stirring occasionally.
Reduce the heat and let the onions slowly caramelise, stirring occasionally.
Quickly stir in the egg white from the separated egg.
Take the pan off the flame.
Mix in half the chopped chives/herbs 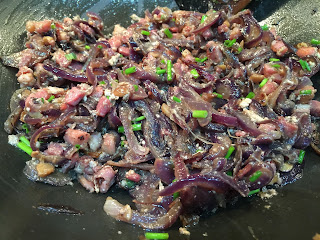 Remove the pastry from the fridge as the onions caramelise and line it with nonstick baking paper and baking beans. Blind bake for 15 minutes until the edges just start to colour.
Remove from the oven and discard the paper and baking beans.
Then return to the oven for 5 minutes to brown the base a little.
Remove from the oven and brush all over with the beaten egg yolk to create a seal.
Leave to cool on a wire rack. 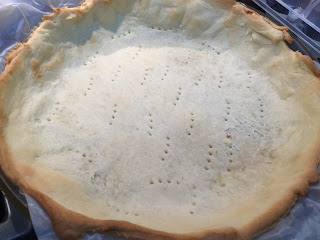 Slice the potatoes into even sized discs.

Arrange the onion mixture across the base of the pastry, then arrange the potato discs in concentric, overlapping circles so that they cover the entire surface. 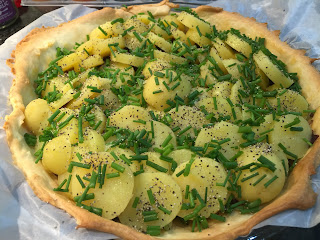 Sprinkle the comté cheese and remaining chives/herbs on top and season well with salt and pepper. 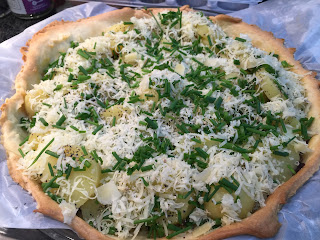 Bake for 15-20 minutes until the potatoes have browned a little and the cheese has melted.
Remove and allow to cool in the tin before serving. 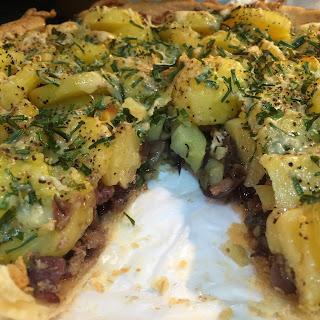 Serve slices as is, for a snack or with a side salad for a complete balanced meal.

What I would do differently - When I added the grated cheese pre-baking (I used only about 50 gms) it looked like a lot, but once it melted down, the cheese flavour was very subtle.  I would use a lot more cheese when I try this recipe again. The cheese combines well with the potato.

Disclosure : I received the Comte Cheese through the Tesco Orchard program in exchange for a review